How did we get into this economic mess? Gambling. 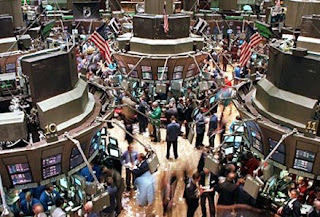 In Vegas you can bet on pretty much any sporting event. Even some you've never even heard of. Turns out our economy is the same way. But it hasn't always been that way. I recently watched this 60 Minutes special on Credit Default Swaps and how they contributed to our current economic downturn. Enlightening to say the least. Check out the written transcript here if you don't want to watch the video. Even for a financial novice like myself it makes perfect sense. And it's extremely worrisome.
What are credit default swaps? Steve Kroft of 60 Minutes states,

"Essentially they are side bets on the performance of the U.S. mortgage markets and the solvency on some of the biggest financial institutions in the world. It's a form of legalized gambling that allows you to wager on financial outcomes without ever having to actually buy the stocks and bonds and mortgages."

Kroft goes on to say,

"Think of it for a moment as a football game. Every week, the New York Giants take the field with hopes of getting back to the Super Bowl. If they do, they will get more money and glory for the team and its owners. They have a direct investment in the game. But the people in the stands may also have a financial stake in the ouctome, in the form of a bet with a friend or a bookie."

This type of betting and gambling used to take place in what was called "Bucket Shops" which were outlawed around 1907 after the stock market fell 50% from it's peak the previous year. In 2000 Congress exempted this "Bucket Shop" law and the credit default swap markets went soaring from roughly $100 billion to more than $50 trillion dollars. Yes. Trillion. According to the report,

"You could bet on anything from the solvency of communities to the fate of General Motors...A lot of the money was made financing what seemed to be a never-ending housing boom, selling mortgage securities they thought were safe and credit default swaps that would never have to be paid off."

And then the housing market took a turn for the worse and there was not enough money to pay off the debts which is essentially what ruined Bear Stearns, Lehmann Brothers and AIG. The scariest part of all this is that these credit default swaps are completely unregulated so we have no way of knowing how much money is still floating out there.
Hedge funds operate in a very similar manner and I posted my thoughts about this a while back and how I feel it can be conflict of interest when a person who is influential over a particular market or industry can bet for or against itsself and reap the rewards. This just doesn't make sense to me. But again, I'm no financial guru. What I took away from this report is that we simply allowed anyone to bet (Trillions of dollars) against our own housing market which at the time was similar to betting against the race horse who is favored to win. Then when the housing market started suffering people demanded their "winnings" and there simply wasn't enough cash to go around and the gears quickly grinded to a hault.
So...I contend that while the housing market has seen better days, it's certainly not what got us into this mess. A law was created roughly 100 years ago in order to prevent a stock market crash. Here we are eight years after the law was overturned and look at where we're at. It's funny how history repeats itself and we'll just never learn from our mistake.

I know you have opinions on the matter so bring it. Watchoo got?
Posted by Jeff Duffey at 8:43 AM